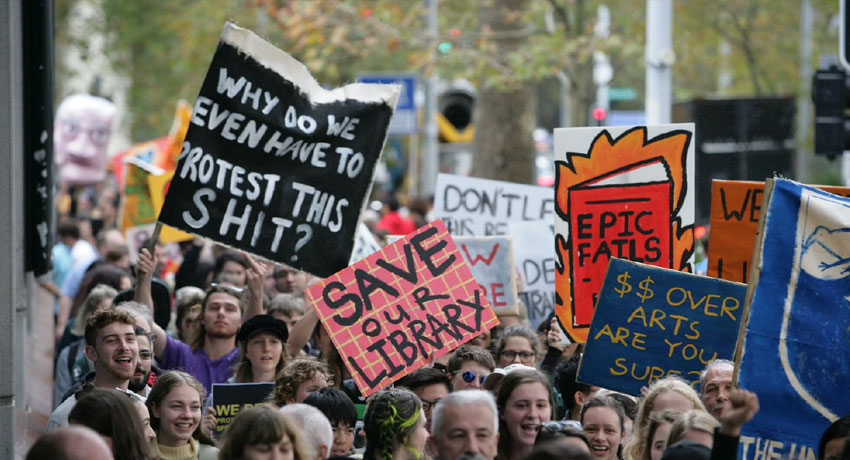 Over the holidays, the University announced that it would be closing five specialist libraries. Two of these are satellite campus libraries, and will be closing when the campuses close. These students will need library space when they relocate. The remaining three are all Creative Arts and Industries (CAI) libraries: the Music and Dance, Architecture, and Fine Arts libraries. These are spaces valued by CAI students and the wider University community.

The library decision has followed widespread student and public outrage and opposition to the proposed closures. You might remember our rally with 1000 students last semester, the Save the Fine Arts campaign and ‘lock-in’, and the thousands of signatures and submissions made by students, alumni, professional associations – and even Helen Clark. We asked the University not to close the libraries, protect the collections, formally listen to students’ submissions, and protect student study spaces.

The University hasn’t listened. They didn’t consider any of the student submissions as ‘formal submissions’: we don’t even know whether the committee that recommended closing the libraries read it. This is because the University said that the restructuring of the libraries was an ‘employment issue’ – and students aren’t allowed to comment on employment matters.

This argument is laughable. It is both possible and necessary to separate the employment effects of restructuring libraries (staff losing or moving jobs) with the impact of closing libraries on student learning outcomes. Without commenting on changes to job titles, or the structures of support librarians within Libraries and Learning Services, we can put forward arguments why student study spaces are important, why CAI students need easy access to physical resources, and why specialised and localised libraries are valuable.

What’s particularly bizarre about the way the University’s line is that we know they have drawn the same distinction in the past for other issues. Take the law school student increase, where the law school proposed significant increases in its Part II intake. This increase had lots of staffing implications – in fact, the lack of staff and resources to support the proposed increase was one of the major objections. Yet, this decisions went through committees with student representatives, and the student voice was formally taken into account. It’s hard to see why a distinction was drawn in that case, but not with closing libraries.

We’re now lobbying for student consultation on what the spaces that used to be libraries will become, and on shaping the new General Library. The General Library will now be one of two libraries on the city campus. Lots of books will be placed in off-site storage, where students can request books to be delivered, and the number of study spaces will be increased.

However, the University has backtracked. They are now refusing to meet or consult with any students in person. All students use the libraries, especially the General Library, and know what resources and study spaces they need to study best. Making this sort of decision without transparent student consultation is shocking, and we’re talking to the University about this to reach a compromise.

The other thing we’re working on is high-level University policy to try and prevent this sort of thing happening again. Council has indicated support for some better processes that meaningfully involve students. We’re working on revamping the Student Charter, and getting the University to commit to treating students as partners when making decisions that affect our learning.

University management is increasingly uncompromising and non-transparent. They plough forward with their agenda regardless of whether it’s good for our learning. Their reluctance to meaningfully involve students in decisions is leading to bad decisions, and shouldn’t be allowed.

The last few months have shown that students are not apathetic. We care, and deserve to be heard and included in decisions at the University. The University just needs to listen.